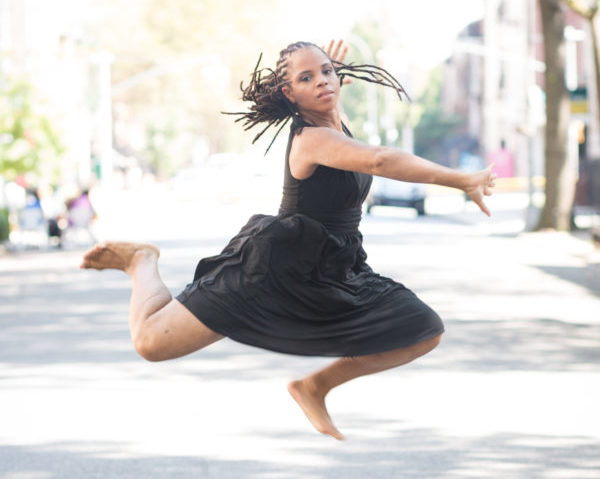 Strength in Spirit is an exploration of the subject of spirituality from a broad perspective.  The piece probes the following questions: What are universal truths that permeate all belief systems? How can one sustain their spirit, especially in the midst of challenges and troubled times?

Created by choreographer Maxine Montilus, MV Dance Project aims to be of service to audiences and communities through dance.  In performance, the company intends to inform and enlighten others, as well as initiate dialogue and build connections among others.

Maxine Montilus is a native of Brooklyn, New York and a first-generation Haitian-American.  Maxine has a B.F.A. in Modern Dance Performance from The University of the Arts, an M.A. in Arts Management from City University London, and an M.A. in Dance Education from Hunter College via the Lincoln Center Scholars program.  She has also had the opportunity to study Cuban folkloric dance, music and culture through the annual “Dog Aguas” program founded by Danys “La Mora” Perez from 2010-2012, which took her to Havana, Matanzas and Santiago de Cuba; and has studied Haitian folkloric dance with various master teachers, such as Nadia Dieudonné, Adia Whitaker, Peniel Guerrier and Julio Jean. In 2018, she received the Travel and Study Grant from The Jerome Foundation, which allowed her to participate in Vinn Pran Baget, a Haitian folkloric dance and music program directed by Dieufel Lamisere.

Maxine is a 2014 EMERGENYC artist with New York University ’s Hemispheric Institute for Performance and Politics.  As a dancer, Maxine has performed with Ase Dance Theatre Collective, Balasole Dance Company, KaNu Dance Theater and Tamara LaDonna Moving Spirits. Maxine performed with SpeakDance Collective in the Festival of Art and Folklore in Santiago de Cuba in April 2016. She was featured in the theatrical production “La Sirene: Rutas de Azucar” produced by Lukumi Arts in December 2016 at JACK Art Space, and in February 2017 at HERE Arts Center.  She also performed in Jean Claude Eugene’s production “Zatrap: HaitiTrauma” at The Landon School in Bethesda, Maryland in October 2017 and Queens Museum Theatre in May 2018.

As a choreographer, Maxine has presented work at the “Being Bushified!” culture and community series hosted by Urban Bush Women, “The Makings of You” (at Dance New Amsterdam) and “Epic Narratives” (at The Actors Fund Arts Center) with Tamara LaDonna Moving Spirits, “Shadow of a Pearl” and “Malgre Tout” with KaNu Dance Theater at Jamaica Performing Arts Center, The Bronx Academy of Arts and Dance, La Mama Experimental Theatre Club, Harlem School for the Arts with Haiti Cultural Exchange for their annual Selebrasyon Festival, and the inaugural Rex Nettleford Arts Conference in Kingston, Jamaica. Maxine is also a member of Dance Caribbean COLLECTIVE, through which she has presented choreography in their annual New Traditions Showcase from 2015-2017.  In 2014, she choreographed BallyBeg Production’s third play and Equity-approved showcase, “The Taste Of It”, and was a 2015 nominee for Outstanding Choreography/Movement in The New York Innovative Theater Awards for her work in the production. In 2017, Maxine served as the Afro Cuban/Haitian Folklore consultant for choreographer Camille A. Brown in her work for the Tony-Award winning musical “Once On This Island”.