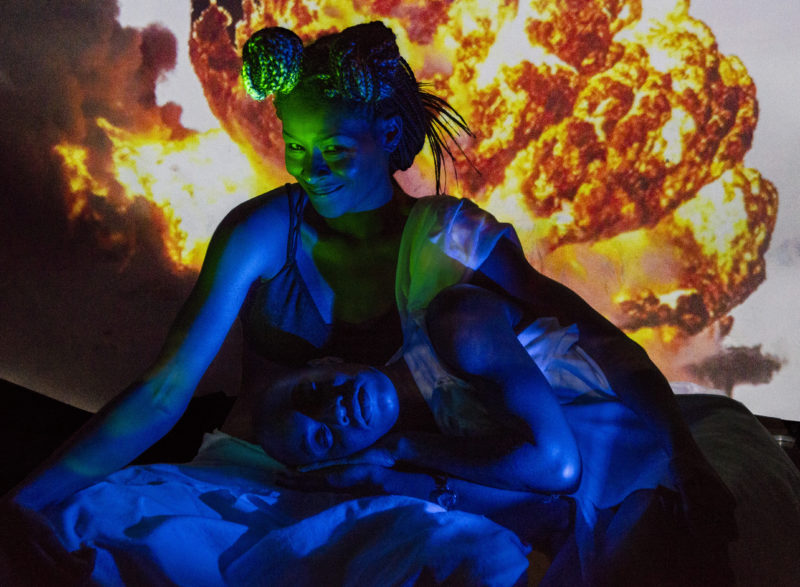 Women, everything is going bad so we should go bad too!

Black Daisies is a multidisciplinary project made of a photo essay, dance film, art installation and live performance. Black Daisies portrays “bad feminists” who unapologetically luxuriate in seduction, gluttony, belligerence and hedonism to establish and maintain their integrity as human beings.

Fred Hatt, Photographer and Body Painter New York based artist Fred Hatt has done drawing and painting, photography and video, lighting and projection, writing and performance, since the 1990’s. He often collaborates with dancers and performers, making dance for camera, shadow play, painting as performance, and other combinations of visual media and live performance. His visual artwork is currently represented by Figureworks in Brooklyn, and has an extensive online presence. He has created projection and special lighting effects for dancers and performers at venues including PS 122, LaMaMa ETC, Dixon Place, and Chashama.

Brian Hallas, Videographer Brian Hallas is a filmmaker, sound designer, songwriter, photographer, writer, and educator. He has been involved with the theater since the third grade, and has been an associate of National Medal of the Arts recipient Ping Chong since 1983. Brian has been fortunate to dine in many parts of the world, due to a life in the Arts, where he otherwise would not have been fortunate enough to dine.

Negesti Dana McIntosh, Performer Negesti was born and raised in Brooklyn, NY. Her passion for dance was sparked at the age of fourteen when she joined the all girl dance group Keep Getting Better (KGB). During her years in KGB she trained in West African, hip-hop, step, and contemporary dance. During her senior year of high school, she joined the Williams College West African dance group, Kusika, and performed for the New Meanings Percussion Symposium as well as the annual fall and spring shows. Negesti furthered her dance training after being accepted into the Trinity La MaMa program and studying South African traditional dance at the University of Cape Town. In 2014 she joined KowTeff, a Brooklyn based traditional West- African dance company, and has continued her dance journey with the company.

Rakia Seaborn, Performer A native of Detroit, MI, Rakia Seaborn is a writer, choreographer and performer whose work has appeared at Dixon Place, La Mama E.T.C., The Tank, AUNTS, chashama, JACK and Brooklyn Studios for Dance. Seaborn has worked with Kathy Westwater, Dianne McIntyre, Rashaun Mitchell, Jodi Melnick,  and Meta-Phys Ed. She graduated from Oberlin College in 2007, earning a Bachelors of Art in Dance with a concentration in Choreography, and in 2014, she gained an MFA in Dance from Sarah Lawrence College. Seaborn is a 2018 Mertz Gilmore Late Stage Creative Stipend recipient.

Kendra Ross, Performer Kendra Ross is a dancer,choreographer, and community worker from Detroit, MI who now lives in Bedford-Stuyvesant. As a performer, Kendra has traveled the world dancing for Urban Bush Women, DJ Kid Koala, MBDance, Monstah Black. A recent Artists in Residence at Brooklyn Studios for Dance and BAX Space Grantee, Kendra is currently a member of  Ase Dance Theater Collective and Movement of the People Dance Company. Kendra is also the Founder/Director of a BedStuy based art platform called STooPS.

Kristi Anne Francis, Performer KristiAnne Francis is a dancer, teacher, and choreographer from Queens, NY.  Although she has been moving and shaking since she was a toddler, she began to study dance seriously in high school.  While obtaining her BA in Dance from Hunter College, she has had the privilege of performing in works by prominent choreographers such as Jawole Willa Jo Zollar of Urban Bush Women and Ronald K. Brown of Evidence.  She was also chosen to participate in the Hunter College Dance Department Dance Residency in Trinidad & Tobago in 2007. She graduated from Hunter College from the Arnhold Graduate Dance Education Program with an MA in Dance Education in 2016. She is also a NYS certified K-12 dance educator currently teaching at the Global Learning Collaborative High School on the Upper West Side and has served on the New York State Dance Education Association board as Director of Fundraising. She has performed in various cultural events and dance venues throughout NYC and Côte d’Ivoire and is currently in her 10th season with Kotchegna Dance Company under the artistic direction of Vado Diomande.

Zara Machatine, Marketing Director Born into a family tradition of puppetry and performance arts, Zara has an extensive background in immersive multimedia experiences. From stilt-walking & paper mache, to creative dance & classic Sicilian marionette work, she brings an old school appreciation for technical execution. Oberlin educated in African American History, she aspires to bridge the history of people of color   with the pivotal current state of cultural struggles. Since 2014, Zara has been heading the customer success team at a social media analytics startup giving global brands creative insights for marketing and branding strategy.